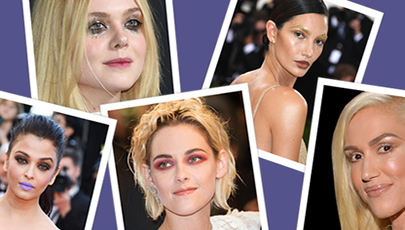 For so long, the hair and makeup looks on the red carpet only dared to whisper, with only occasional outbursts to break up the quiet. But, thankfully, this is no longer a time of subtle tweaks: 2016 has so far seen more than a few bold gestures with proud celebrity statements and history-making transformations.

Whether it’s a gilded eyebrow, an off-kilter lipstick or an unconventional smokey eye, these new style statements stoke our imaginations and inspire us to take a few beauty risks of our own. Here are just a few of our favourites.

If a beauty novice were to study Gwen Stefani’s monochromatic nude makeup and wavy strands at the Billboard Music Awards last spring, one might say there was much ado about nothing. And they wouldn’t necessarily be wrong. But, since the pop icon has pretty much always rocked a red lip and cat-eye, as well as peroxide high-pony and pompadour, we (along with the entire Twittersphere) went a little, well, B-A-N-A-N-A-S. For the record, we totally dug this new atypical appearance but the look proved so controversial that Gwen’s longtime makeup artist Gregory Arlt took to Facebook to defend his makeup choices. “You’d think I sent her out with tinted moisturizer and Chapstick from what people were saying!” he quipped. “Bottom line is that makeup is the ultimate disposable accessory. Have fun with it and take it off at the end of the night!” We couldn’t agree more.

Adele and her cat-eye, J.Lo and her glow, Kim K and her contour—some stars have their signature looks down pat and are rarely seen without them. Taylor Swift, who could always be counted on for her buttery blonde locks and classic crimson pout, is another celeb we thought would never trade in her trademark. How quickly things can change. The pop star’s high impact transformation started last April, first with a shaggy bob followed up just weeks later with a freshly bleached dye job. The singer’s reimagined look, however, wouldn’t be complete until the following month at the Met Ball when she sidelined her signature cherry red lips for an oxblood stain that made gothic dark lipstick look achingly glam. Although neither the platinum colour nor the vampy pout lasted long, there’s no denying that the calculated beauty risk was a daring success for Swift.

Sure we’ve seen some bold beauty transformation by way of a fearless chop or radical lippy this year, but leave it to Kristen Stewart to show that a game-changing makeover can call for as little as recalibrating your colour palette. The Cannes premiere of Personal Shopper last May found the starlet showing off an unexpected wash of shadow that took her look into glamorously dark territory. Rather than relying on her usual smokey eye, Stewart rimmed her lids with a heady dose of dusty red shadow for a look that was equal parts Ziggy Stardust and haute mall goth; providing the perfect example of how it can pay off to stray from your style staples.

GET THE LOOK: Stila’s Got Inked Cushion Eyeliner in Garnet Ink can be applied as a richly pigmented eyeliner or across the lid for a scene-stealing statement look.

Indian actress Aishwarya Rai—often dubbed “The Most Beautiful Woman in the World”—has a knack for taking the red carpet by storm with her unerring commitment to extravagant gowns. But at this year’s Cannes Film Festival, it was her beauty look that became a viral sensation. Indeed, all it took for the Bollywood heavyweight to deliver a major makeup moment was supercharging her lipstick with a bold, lavender-blue hue that offset the classic appeal of her off-the-shoulder embroidered frock. Risks like these may be debatable (Twitter trolls were out in full force), but Rai turned her lip colour into an international talking point.

GET THE LOOK: Smashbox Always On Matte Lipstick in Vibrant Purple maintains the same striking colour for up to eight hours.

Model Lily Aldridge isn’t exactly known for her daring beauty antics. Aside from the occasional matte red lip or highlighting her cheekbones with a surreal shine, she’s pretty much stayed in the same beauty lane for the duration of her career. That is until she appeared at this year’s Met Gala. Making the case for a bold beauty statement, the Victoria’s Secret Angel painted her eyebrows a glittering gold that perfectly matched her gleaming Michael Kors gown and lit-from-within skin. Proof that head-to-toe to shimmer might be the ultimate beauty move.

GET THE LOOK: Dip an angled brow brush into a pot of Shiseido Shimmering Eye Cream in Lemoncello, for gilded full arches.

From rosebud pink lips to replacing her signature flaxen blonde with a pale pink-tinted hair colour, Elle Fanning has perfected the art of ethereal, nymph like beauty accessorizing. Which is why we did a double-take when, in a dramatic departure, the actress sat front row at the Saint Laurent Fall 2016 show last February sporting smoked lids dripping in glitter and plenty of soot-black liner. Like a glam-rock dream, the result was moody and darkly refreshing—and a cool reminder that turning to the dark side may be may be the quickest way to transform your fall look.

GET THE LOOK: Lise Watier Eye Glitter Eyeliner in Silver Stars will have you sparkling all season.